David Mitchell and co-workers at Lilly recently published the scaleup of LY2784544, a JAK2 inhibitor.  Their paper is chock-full of interesting chemistry and is highly recommended for a read, but let’s look at just one slice: the installation of the morpholinomethyl group using a radical addition reaction.

In a first-generation approach, the intermediate shown below was subjected to Minisci’s method for radical alkylation.  Phthalimide-protected glycine was used as a source of pthalimidomethyl radicals.  Around 3.5 kg of the CH substitution product was obtained, but the route was abandoned due to reproducibility problems, relatively low regioselectivity, insoluble by-products, and the need for large amounts of silver nitrate. 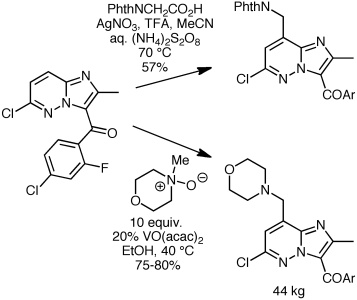 In a second-generation route, iminium ion chemistry was explored, but none of the desired material was formed.  In their survey of iminium ion techniques, however, the Lilly group found one outlier:  Hwang and Uang’s method using N-methylmorpholine-N-oxide and VO(acac)2.  In the Uang work, electron-rich arenes such as phenols and naphthols were aminomethylated; there were no examples of electron-deficient heterocycles.  Nonetheless, after some optimization, the Lilly group was able use the Uang method to produce the desired aminomethylated material shown above in good yield on a 44 kg scale.

Mechanistically, Mitchell and co-workers believe the Uang chemistry is substrate-dependent.  For electrophilic substrates such as the current imidazopyridazine, the reaction proceeds by a radical mechanism involving the addition of a relatively nucleophilic α-amino radical to the pyridazine ring.  With electron-rich systems such as those found in Uang’s work, an iminium ion mechanism is probably operational.  Further mechanistic work is underway.

For those of you in drug discovery, do you think it would be interesting to carrying out such radical aminomethylations on existing drugs or related compounds?  I’m reminded of the recent bevy of direct trifluoromethylation reactions by Baran, MacMillan, and Qing, featured at C&EN and In The Pipeline.  Yes, aminomethyl groups and trifluoromethyl groups serve greatly different ends, but direct introduction of the former at rather unreactive sites would seem to be a nice option.

Other Blogs of Interest